Now that various eras and cultures of the prehistoric south India have been discussed, I am moving on to provide very latest developments and their effects on the interpretation of pre history of South India.

I.Mahadevan in 1999 proposed that sign 47 and 48 of Indus script represent a deity and his name based on Dravidian Etymology should be Murukan[1]. This theory couldn’t be completely accepted as there was no proof that Indus script language was a Dravidan language.

In 2006 a Neolithic stone celt with the Indus Valley script was discovered in a village called Sembian-Kandiyur near Mayiladuthurai in Nagapattinam district, Tamil Nadu[2]. The celt, a polished hand-held stone axe, has four Indus Valley signs on it. The artifact with the script can be as old as 1500 B.C., that is, 3,500 years old. Mr. Mahadevan estimated it between 2000 B.C. and 1500 B.C.. It was in the classical Indus script. He ruled out the possibility of the celt coming from North India because the material of this stone is clearly of peninsular origin.

This theory is further strengthened by a report in The Hindu[3] wherein recent excavations in Nagapattinam district in Tamil Nadu, megalithic pottery with graffiti symbols that have a strong resemblance to a sign in the Indus script have been found. Iravatham Mahadevan says that the arrow-mark graffiti on the megalithic pottery found at Sembiyankandiyur and Melaperumpallam villages are always incised twice and together, just as they are in the Indus script.

While the megalithic/Iron Age pottery in Tamil Nadu is datable between 800B.C. and 3 A.D., the Indus script belongs to the period 2600 B.C. to 1900 B.C. of the mature Harappan period. Mr. Mahadevan, observes this as continued the tradition of the Indus script in the megalithic graffiti of Tamil Nadu. He concluded that the common sequence found in various artifacts in southern India and the Harappa tablet may indicate that the languages of the two inscriptions are related to each other.

So these findings prove two things:

· This also points to the fact that common language was either Dravidian or Proto Dravidian.

So if the language of both the civilizations were Dravidian then Mahadevan interpretation of Sign 47 and 48 of Indus script should probably denote Murukan.

I have listed below I.Mahadevan’s analysis of symbol 47 and 48 of Indus script[1]: 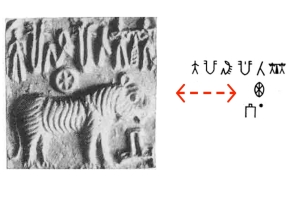 A deity in the Indus script is likely to be an ideogram with a recognizable anthropomorphic form. The sign will also be of frequent occurrence and occur in repetitive passages suggesting some religious formula. Signs 47 and 48 representing a seated human-like figure meet the requirements and are identified as prima facie representing a popular Harappan deity.

The deity is represented as a skeletal body with a prominent row of ribs (in sign 48 only) and is shown seated on his haunches, body bent and contracted, with lower limbs folded and knees drawn up.

The two related but distinct signs of the Indus script seem to have later coalesced into one symbol (resembling sign 47) outside the Harappan region.
According to the interpretation proposed here, the seated posture is suggestive of divinity and the skeletal body gives the linguistic clue to the name of the deity. The basic Dravidian word mur (Ta. muri, Ka. muruhu, Pa. & Ga. murg, Go. moorga etc., DEDR. 4977) means ‘to bend, contract, fold’ etc. Applying the technique of rebus, we get mur (Ta. murunku, murukku; Ma.murukka, Kol., Nk. murk, Malt. murke etc., DEDR 4975) meaning ‘to destroy, kill, cut’. etc. Thus the name of the deity muruku and his characteristics ‘destroyer, killer’ are derived.

The skeletal forms in the pictograms suggest that the god was conceived as a disembodied spirit.

According to Mr. Mahadevan, the first sign on the celt depicted a skeletal body with ribs. The figure is seated on his haunches, body bent and contracted, with lower limbs folded and knees drawn up. The second sign showed a jar. Hundreds of this pair have been found on seals and sealings at Harappa. Mr Mahadevan read the first sign as “muruku” and the second sign as “an.” In other words, it is “Murukan.” .

After this interpretation we can reconstruct some of the possible happenings,

Southern Neolithic people, who were present in Northern Tamil Nadu and Southern Deccan had primary occupation of hunting. They seemed to have settled in Hills and also started some kind of domestication of cattle, sheep and goat. They were Dravidian language speakers and believed in spirits and named their god most probably Murukan.

Hunting being a primary occupation the god who was spirit must have been slowly evolved into a hunter god. Mahadevan has shown this possibility with his study etymology of the word Murukan***[2](please see end of the essay for explanation).

The other point of view here is that, Neolithic people have the habitats in Hills. This was preserved till the Sangam age where Murugan was native deity of Kurunji (mountainous region).

Another development in this kind can also be sensed, Murukan was spirit till Sangam age. He didn’t have any form though he was known as Hunter god. In Sangam literature He posses young girls and priest Velan . So it is safe to assume during the megalithic and Neolithic times he was worshiped only as a spirit. So if there was a protective spirit whom did he protect the people?, so there must be an evil spirit too. This may be starting point of evolution of Cur (who later became Curan and finally asuran Surapadman during the 6AD). Cur in early Sangam literature was a demonic force that causes terror. Cur infest mountain passes springs water falls and often appear in the form of women in Sangam literature. Based on these traditions we can assume that protective spirit worshiped by the people was Murukan and the harmful spirit in the mountain region was Cur.

Here is the link for my orkut community for this blog http://www.orkut.com/Community.aspx?cmm=49797549&refresh=1

The two defining characteristics of the pictorial depictions of the Harappan deity are (a) a skeletal body, and (b) bent and contracted posture. The Dr. etyma with the nearest meanings are as follows.

It may be infered from the linguistic data summarised in (a) and (b) that PDr. * mur/mur-V is the primitive root from which words with the meanings ‘shrivelled’ and ‘contracted’ have been derived.

Technique of rebus was applied to try and discover the Dr. homonyms with the intended meanings.

The two sets of etyma in (c) and (d) taken together indicate that the original name of the deity was something like * mur/mur-V and that his essential traits were those of a fierce god, destroyer or hunter.

The legends and myths surrounding the deity have become inextricably mixed up and both sets of etyma in groups (a) to (d) apply to him. In short, the deity was both ‘a departed soul or demon’ as indicated by his skeletal body and contracted posture, and also ‘a fierce killer or hunter’ as indicated by the Dr. etyma. Furthermore, the linguistic data in (e) can be interpreted to mean that the deity was considered to be ‘ancient’ even in Harappan times.

This site uses Akismet to reduce spam. Learn how your comment data is processed.