Mind of any human being is very complex. All through the history of human kind people have tried to map this mind and continuously failed. Inside the mind is the most vital feeling of each person the Ego. All people need ego. Ego at a normal level is the self esteem. Every human being tries to present him/herself in a nice way in front of others. This presentation of the self  becomes very important when it being presented before the opposite sex. Each and every person has a negative quality in him, but when he tries to present himself to others, he tries to avoid them as much as possible. It is a very natural action of any person to try to create a good impression about himself to others. This is at a very basic level i.e. when your ego is under control. In this state at least a person acknowledges his negatives and hence tries to hide it. But when Ego is beyond control and the presentation of the self is filled only with assumed greatness of the self. The mind never acknowledges the negative the person has and hence completely ignores it. It doesn’t try to hide it, rather ignores the negatives as if they never existed.

This state of uncontrolled ego is explored by Kamban. Kamban’s Ravana has won over the world. He is the supreme lord and has defeated every one else. His ego is beyond control as he thinks there is no match for him in this world. Yet he is normal human being. He is in love with Sita. He is meeting Sita for the first time and Sita is alone(yeah his plan worked perfectly Rama and Lakshmana was behind the deer). He assumes the form of sage and visits her. As sage he speaks greatness of Ravana (which is offcourse himself) and tries to seduce sita through words( as surpanahaka did to Ravana by describing Sita’a beauty). The whole episode takes around 20 stanzas. But I would like to illustrate Kamban’s psychological depth to his character Ravana through one of the stanzas.

“He was strong enough to seize the great glowing mountain

where Siva rules and lift it even to its tiniest roots,

and his arm ground the fighting tusks into powder

of the elephants who support the directions with their great energy.”

The history of this episode must be refreshed and hence I would use some work of Mr.Vijayakumar of Poetryinstone.in. He writes blog on temple architecture and long ago he had written two articles on this episode. His articles inspired me long ago to create this particular blog.

Ravana was flying in his Ariel car and Mount Kailash blocked his way. So he tried to uproot it  and throw it out of his way and he succeeded in lifting the Kailash. The mount shook and all the residents (Shiva bakthas ) trembled. The goddess Uma trembled as the foundation of the holy mountain was shaken and she embraced the great Lord for safety.

So what Ravana has told to Sita is this, 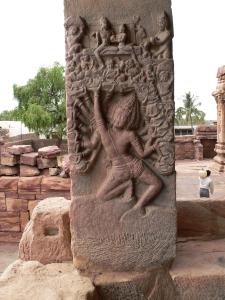 and what he hasn’t told Sita is this,

The great Lord Shiva without showing any emotions pressed his foot ont he mountain’s crust and Ravana couldn’t bear the weight of the mount any more. He was trapped and his head and limbs were crushed. He was in agonising pain and whole of Kailash had smile seeing his agony.

Ravana here just prefers to say  his feats which would impress Sita and keeps away from the humiliation he suffered, probably an intentional partial amnesia.

And while I narrate you this episode if I just stop here, it would be an intentional partial amnesia from my side. Hence I proceed with this story, Ravana wasn’t bogged down. He rather understood the greatness of the lord and wanted convey his apologies to the lord and soothe him. Hence he went on sing the a Sama Veda(Ravana was a Brahmin well versed with all Vedas). Even this didn’t soothe the Lord. Hence he plucked one of his ten heads and with his nerves as the string he created a Veena and started playing music with this veena. The music was so soulful that, Shiva lost his anger and started to enjoy the divine music. He was so delighted with the music of Ravana, he blessed Ravana with long life and with a gift of an invincible and ever truimphant sword.

Jumping back to the track, the idea of a person trying to hide certain things so that his/her weakness is not exposed is explored brilliantly in one of Akira Kurasowa ‘s master piece Roshomon. Since this movie is out of copy right, I am also posting the movie here. I wish atleast one or two readers go on to watch this master piece.

I recommend readers to visit the following posts of Mr.Vijayakumar , where gives more insights into these art works in the stone,

Ravana the great : King of Lanka by M.S.Purnalingam Pillai

Link to my orkut community http://www.orkut.com/Community.aspx?cmm=49797549